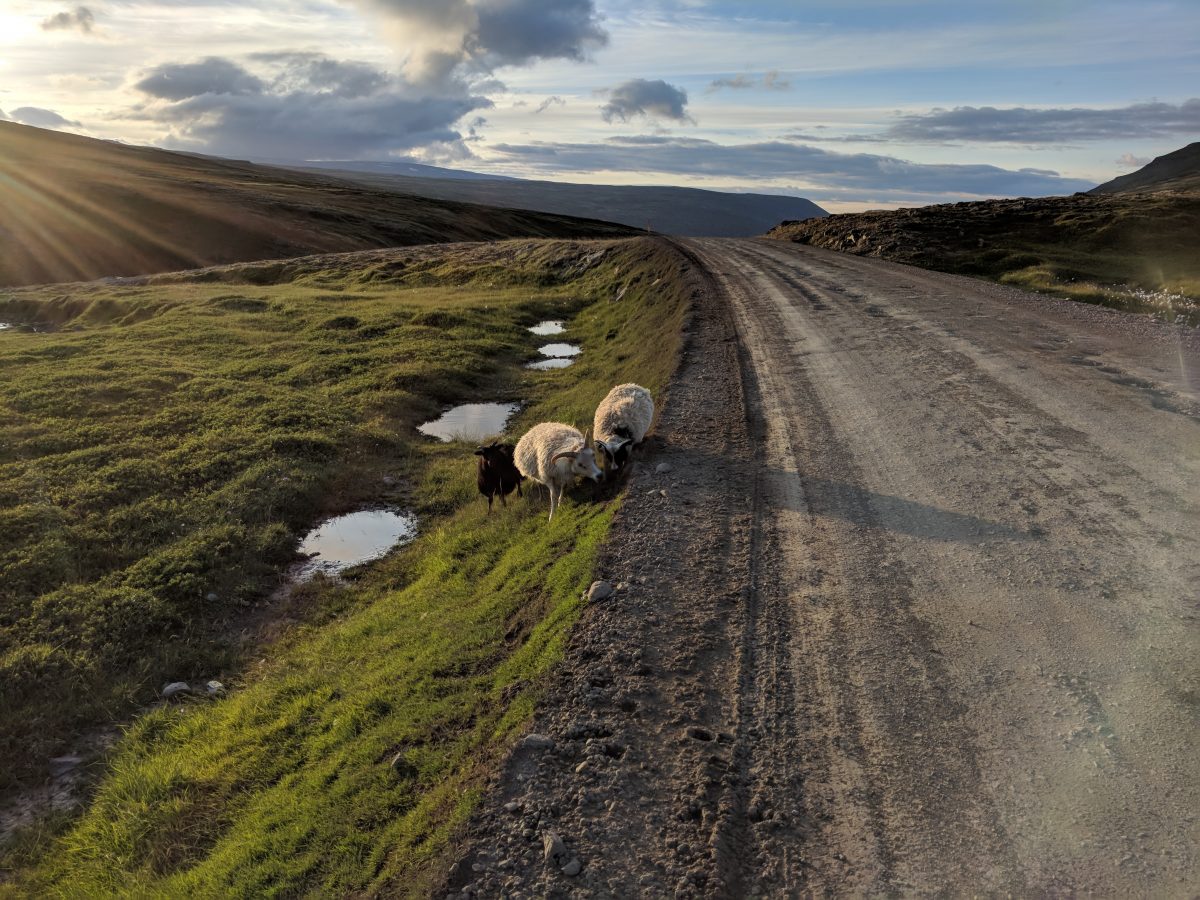 After an overnight flight, we were speedily driving around the moon-like surface of Iceland in search of the next great vista.  At the edge of a small town we encountered a speed-limit sign that lit up a smiley face or frowny face depending on your deference of the law.  As we drove by I earned a frowny face and thought it was the funniest thing.  After my second or third frowny face, my friend David wondered aloud if these signs might be issuing speeding tickets.

A quick internet search revealed that speeding tickets in Iceland can cost more than my $400 round trip airfare!  My mind quickly went where it naturally goes—worrying about the 3 to 4 tickets that I was going to receive in the mail for $2,000 or more dollars.  Despite my fondness for Mark Twain’s quote “I’ve had a lot of worries in my life, most of which never happened:” I have always struggled to not worry.

The following day I was driving on the Ring Road and the entire road changed to freshly laid loose gravel.  I had never experienced anything like it before.  The car in front of us turned into a gravel machine gun.  Before I could slow down, a piece of gravel chipped the windshield and I immediately thought of the windshield insurance that I had rejected the day before.

The warnings at the rental car agency were plentiful. Sandstorms can come out of nowhere and ruin the vehicle’s paint.  Windshields get chipped so often that the standard insurance doesn’t cover them.  The brochure explained that because Iceland is an island, glass is very expensive.  Our dashboard even reminded us that “Driving in Iceland is not like driving in other countries.”  No truer words have ever been written.  How could I have been so careless?  More worry.  My rational brain tried to remind myself how lucky I was to enjoy such a beautiful country, but I was struggling to fight my amygdala that was calculating the cost of a new windshield when I returned the rental car.

In addition to the mounting expenses in Iceland, I was getting extorted by a jerk over a minor fender bender I had the previous month.  He wanted me to give him $850 for a $500 bumper repair and I decided in anger to let him file with my insurance company.  How much would my car insurance premium be increased at renewal?  Why was all this happening to me?  I couldn’t sleep that night.  I thought my whole trip was going to cost $1,500 and my worrying brain had convinced me I was going to have to pay over $3,000 for the windshield and speeding tickets that would be mailed to me.  I rationally knew that the worst case was not going to make me miss a meal, but I struggled to stop worrying.  It was robbing me of joy on a really nice trip.

Out of the blue, I remembered an idea that I had heard about on a Tim Ferriss Podcast.  One of his guests dedicates a certain amount of money to charity each year and then subtracts out the unforeseen expenses from what he gives to his charities.  When you get mad about an unexpected expense it helps a lot in the moment to know that you aren’t out the extra money.  The speed camera or fender bender isn’t hurting you—they are hurting a charity.

I decided to try out this mental accounting hack for 2019 and I am happy to report that it really works.  I put extra expenses with travel, cars, and people ripping me off on the list of things I would subtract from my charitable giving.  I decided that health care costs and home repairs could easily wipe out all of my giving in a year and said those expenses wouldn’t count.  I also decided I would still give the planned amount to my church no matter what happens.

I created a note in Google Keep on my phone and it was nice and empty for the first six months of 2019.  Then I received a message from my mother-in-law while I was on vacation in Spain.  I had parked my car at her house because it is closer to the airport and a storm had blown a huge limb off her tree that crushed my car.  I calmly called a repair man that drove to her house the next day to install a new windshield for only $300.  I was barely mad.  I wasn’t out the $300; the charity was. The hack was working better than I expected.

A month later I received two speeding tickets for about $170 in the mail from the Spain trip.  In the past, I would have been fuming.  This time I simply paid the fines over the internet, added them to my Keep Note and was on my way.  I didn’t waste an extra minute worrying.

Later in the Summer, I landed in Santa Cruz, Bolivia and tried to get some Bolivianos from the ATMs at the airport.  My debit card didn’t work.  I didn’t think much of it and figured I would try again when I landed in La Paz.  9 ATMs later, I called my bank and they confirmed that I had put a travel notification on my debit card and could not explain why I could not access cash.  As dinner time arrived, I realized that very few restaurants take credit cards in Bolivia.  I ended up having to buy dinner at the grocery store that night.

The best option to survive in a cash-based economy was to take cash advances from my credit card with a 5.5% up front charge and a 20% interest rate.  I was so angry that either my bank or MasterCard had shut my card off and they were now robbing me of about $200 in extra fees to get cash.  Unfortunately, I spent an entire afternoon angry over the situation until I remembered my mental accounting hack.  Once it occurred to me to subtract the fees from my charitable giving, I was quickly able to move on and started to enjoy my vacation again.

As strange as it sounds, this technique has been extremely valuable to my mental health.  It turned out I didn’t get a single ticket in Iceland and the rental company was gracious when I showed them the chip in the windshield.  How many hours of my life have I wasted worrying over events that never even happened?  As we get towards the end of the year, I may even decide to give the full amounts to my charities now that I am so far removed from the unexpected losses earlier in the year.  Knowing the unexpected is not going to hurt you really helps me.  Perhaps it can help reduce your stress and worry too.