A year ago I wrote a piece called The Only Certainty is Uncertainty that highlighted how virtually no one predicted the oil collapse, the surge in the US dollar, and the meteoric rise in US Long Bond in 2014.  Trying to predict the future is a terrible way to make investment decisions.  Let’s review some of the unpredictable moments of 2015.  Exhibit one is the S&P 500.  It is going to finish the year up or down a couple of percent.  In late May, China’s stock market began crashing and the spread between junk bonds and treasuries started to widen, but the US market didn’t seem to care.  In late August, 11% of the S&P 500 vanished in only six trading sessions.  The S&P bounced and tested the August low during September and then shocked almost everyone by erasing most of the crash in just October.  This crash and snap-back rally played havoc on anyone trying to time the market.

Within the U.S. stock market, there was a huge disparity between sectors.  According to Select Sector SPDRs, the consumer discretionary sector finished 2015 with around a 9% positive return and the health care sector finished up about 5.5%.  The worst three sectors were energy, materials, and utilities, finishing down 24%, 10%, and 8% respectively.  In a year where many were worried about slowing corporate profits and a weak US economy, who had the foresight to load up on consumer discretionary (as in stuff you don’t need to buy)?

Most stocks in the US are going to finish down for 2015.  Without the FANG stocks (Facebook, Amazon, Netflix, and Google) the US indexes would have done much worse.  These stocks all appreciated between 30 and 150% in 2015.  Do you remember any analyst pounding the table to buy FANG in late 2014?  Neither do I.

2015 was another terrible year for emerging market stocks.  Does anyone remember the term BRICs?  In 2007 everybody wanted to own Brazil, Russia, India, and China.  These markets had incredible gains from 2003 to mid 2008.  There was even a popular idea that the BRIC countries could decouple from the US economy and grow while the US was in the midst of a deep recession in 2007 to mid 2009.  Until 2009 it was universally believed that China was the growth engine of the world.  If I were to have predicted in 2009 that we would see a reverse decoupling, where the US would grow while the BRICs were in a funk, I would have been laughed at.  As you can see from the chart below, we did have reverse decoupling and US stocks are up over 60% since 2011 while emerging markets are down 30%!  I have no clue when this trend will reverse, but I do know that over the longer term you make money by buying low and selling high.  Emerging markets are significantly cheaper than US stocks at the moment and therefore have a higher expected return. 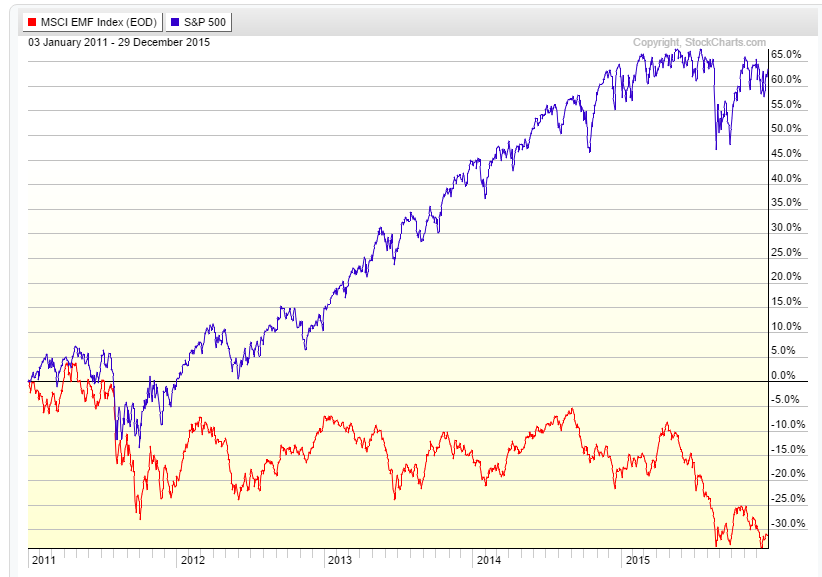 Picking individual stocks is always very difficult and in my opinion so hard to do that it is not worth trying.  2015 brought some spectacular blow ups.  The top holders of Valeant Pharmaceuticals (VRX) is a who’s who of smart investors.  This stock was doing great until they were accused of accounting fraud, Hilary Clinton released a plan to lower prescription drug prices, they ended their relationship with a major distributor, and their CEO went out on medical leave.  As you can see below Valeant lost over 70% in just 3 months.  The smartest men in the room were holding the stock when it began its decline.  Where this stock goes from here is anyone’s guess. 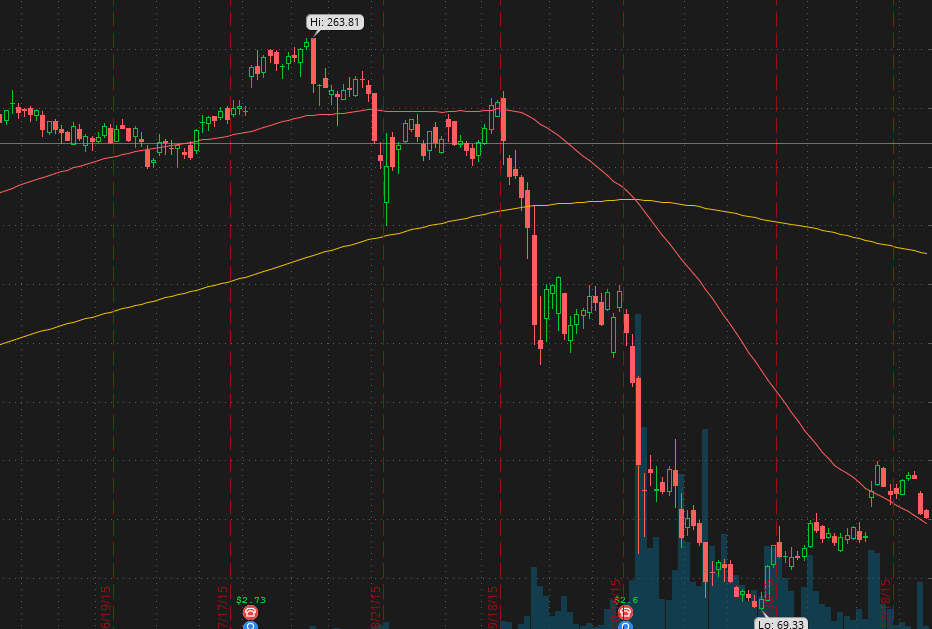 In September of 2015 it was announced that the non-profit, The International Council on Clean Transportation, accidentally discovered that Volkswagen had been cheating on its diesel emissions test in the US for seven years. Let’s consider this stock.  The smartest investors could have studied every aspect of Volkswagen and determined that it was a good stock to own.  No matter how good they are at accounting and examining financials, they aren’t going to catch a company cheating on emissions when even the EPA didn’t catch it.  I was shocked to hear the news and I am going to categorize this as completely unpredictable.  The court cases are going to take years to work out and I have heard the fines could be as high as $37,500 per vehicle sold!  I think predicting where Volkswagen will trade 3 years from now is just as impossible as predicting they would boldly lie about their emissions.

Cheating on your emissions tests is not beneficial to your shareholders. Source: TD Ameritrade.

Speaking of scandals, check out the stock price of Toshiba below.  It was discovered this year that they were inflating the profits in their energy division.  This is a giant company in the world’s third largest economy that was being audited by a top accounting firm.  It is extremely hard to catch accounting fraud when there is willful intent to deceive.  Toshiba’s lies were just another landmine that was impossible to predict in 2015. 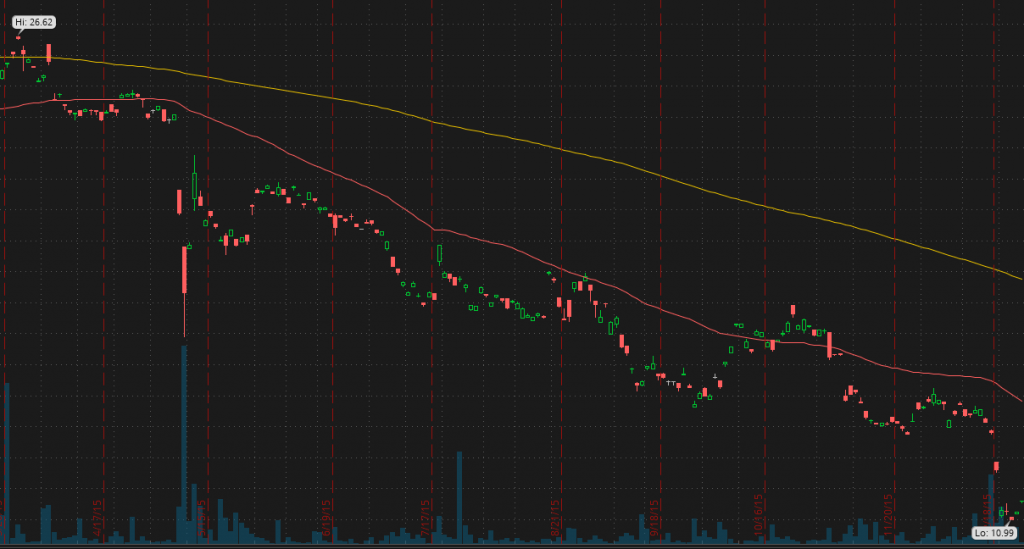 Cooking your books is not good for shareholders Toshiba. Source: TD Ameritrade

The last example on my list is Green Mountain Coffee Roasters (GMCR), the maker of Keurig Machines and K-cups.  This was a favorite short idea for some of the smartest hedge fund managers in the world.  As you can see from the chart below, the stock traded close to $140 in January and had a nice peaceful slope down that made lots of shorts money.  The short sellers were right about the prospects of this company and everything was going swimmingly for them until out of the blue it was announced that JAB Holdings was going to pay a whopping 78% premium for the stock on December 7.  The buyout was another unpredictable event that burned many smart short sellers.

December 7, was a painful day for many smart shorts of Green Mountain. Source: TD Ameritrade

So if markets are too difficult to predict, where does that leave us?  In Charlie Ellis’ Winning the Loser’s Game, he makes the case that beating the markets is so difficult that it is not even worth trying to do it.  I believe that building a globally diversified portfolio that does not involve predictions and meets your risk tolerance is the best solution for most people.  Instead of spending energy trying to forecast (guess) the future, we should be spending our time on tax strategies, asset allocation, asset location, and behavioral psychology.  Being diversified means I can’t brag at the end of 2015 that I was 100% in the FANGs, but it also means that I didn’t lose a substantial amount on the poor performing stocks mentioned above.

Diversification does not guarantee you will not have negative years.  It also means you are going to HATE something in your portfolio every single year.  If everything goes up together, then everything can go down together.  Who knows what 2016 will bring investors?  The US stock market is no longer cheap and we are in the midst of one of the longest expansions on record.  Markets and economies are cyclical and I would not be surprised if a down turn comes in the next year or two.  Now is a great time to review your portfolio’s risk to make sure that you are still comfortable.