At the turn of the decade, I was really concerned about two ideas that were getting lots of press: Modern Monetary Theory (MMT) and the Green New Deal.  Modern Monetary Theory, for the unfamiliar, is the idea that governments can and should borrow and print as much as they need to maximize the growth of their country.  MMTers believe that since the Federal Reserve can print dollars, the U.S. can never default and we should not worry about the National Debt.

The Green New Deal is a plan to make America Carbon neutral by 2030 and relies on MMT to fund the change.  As far as I can tell, there isn’t solid written plan yet that explains exactly how they plan to stop using oil/gas and how much it will cost .  The American Action Forum estimated that it would cost $51 to $93 Trillion over the next ten years.  On the high side, that is $600,000 per American Household.  I am all for a clean environment.  I spent the last year being treated for toxic heavy metals in my body that I acquired from our polluted planet.  I would love to live in a world run solely on clean energy where we don’t have to pay taxes and we choose to work or not because we all receive our Universal Basic Income (UBI).  Unfortunately, resources are finite and we can’t spend that kind of money without consequences.

The Covid spending spree has many believing we can:

We Are All Modern Monetarists Now- Business Insider March 22, 2020

How the Government Pulls Coronavirus Relief Money out of Thin Air- NYT April 15, 2020

I am gravely concerned with this line of thinking.  How many would support extended lockdowns if it was announced that the stimulus checks would be paid for by raising each tax bracket by 3% beginning in 2021?  Congress has already spent $2.4 trillion and is talking about even more.  There wasn’t enough demand for all that debt at these low interest rates, so the Federal Reserve typed a trillion dollars into their account and created a trillion out of thin air–Easy Peasy.

Below is a chart of the Fed Funds Rate (red) and the Federal Reserve’s Balance Sheet (blue).  You can see a sharp rise in the Fed’s balance sheet in 2008.  That is when the Federal Reserve began to implement quantitative easing (money printing).  They had dropped interest rates to zero and started buying US Treasury Bonds to paper over the debt collapse of the Great Financial Crisis.  You can see the Fed’s Balance Sheet (blue line) rose from about $1 Trillion to about $ 4.5 Trillion from 08 to 2018.  The Fed tried to shrink their assets from 2018 to October 2019 until something serious almost blew up in the Overnight Repo Market.  In the midst of an economic expansion and 10 year-stock bull-market, the Federal Reserve began spiking the punch bowl again sending stocks soaring until they peaked this February.    The response to the Covid crisis has the Fed’s balance sheet up about 85% in just nine months and now over $7 trillion.  To put that in context, the entire market cap of every stock in the S&P 500 is $23 trillion!  Many think the Fed’s balance sheet will hit $10 trillion in a year or two.

The M1 Money Supply has gone parabolic.  This is how stocks can skyrocket while forced government lockdowns wreak havoc on the world’s economy. 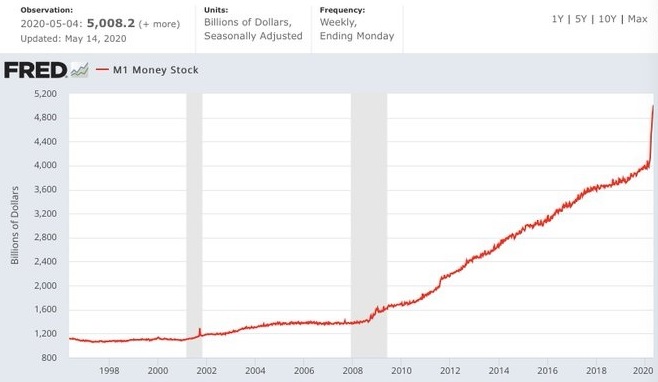 In the first versions of quantitative easing, the Fed only bought US Treasury Bonds.  They are now buying Treasuries, Mortgage Bonds, Municipal Bonds, and even high yield bonds.  Through ETFs, the Fed now owns freshly bankrupt Hertz Rental Car bonds.

The Bank of Japan is old school cool and has been engaged in quantitative easing since 2001.  Their balance sheet is 604 Trillion Yen ($5.6 Trillion) and larger than the Japanese annual economic output (GDP)!  These maniacs are allowed to print Yen and buy stocks with it.  Their central bank currently owns about 5% of Japanese corporate bonds and 5% of publicly traded Japanese stocks!

The Swiss National Bank is also allowed to print Francs and buy stocks.  These savvy bankers can click a few buttons on their screen and create Francs out of thin air and gobble up significant shares of big tech.  According to their latest 13F filing, they own $4.5 billion in Microsoft shares, $4.4 billion in Apple, $3.2 billion in Amazon, $2.7 billion in Google and $1.6 billion in Facebook.

Fiat, paper money, has made the world go mad.  Since it is so easy to create money out of thin air, I don’t see why more central banks don’t click a few buttons and essentially steal valuable assets that the rest of us had to work to build.  Instead of buying all these IOUs, Russia could buy up the world’s gold stock for about $9 Trillion.  Why doesn’t the Saudi Arabian Monetary Authority print a bunch of Riyals and buy all the the world’s oil fields to create a monopoly?  What is stopping the Central Bank of Chile from printing enough Pesos to buy every mine in the world?  As you can see, there is some insanity to our current monetary system.  I just had a Spanish lesson with my Argentinian teacher and she mentioned that her Mom was about to get her roughly $80 stimulus check.  I immediately thought to myself where did that come from when they just missed their debt payment and are about to have their 9th default.  Where do these trillions come from?  Try to count how many dollars Jerome Powell can print in Money Printer Go Brrr.

Nobody knows when the West will go from the magic land of plenty to Zimbabwe, Venezuela, or Argentina.  Those three countries tried MMT and found their limit.  I have no idea how many trillions the U.S government can borrow before it starts to matter.  I can tell you that one day it will matter.  I remember the quaint days of 2001 when George W. Bush promised to pay down the $2 Trillion of debt that we could have retired over 10 years.  Instead of paying it off, we owe $25 Trillion and have unfunded Medicare and Social Security Liabilities of $448,000 per American Citizen.  I highly encourage you to play around on www.usdebtclock.org.

What Do We Do?

I am deeply concerned that on’t waste your life worrying about all the bad things that might happen.  Remember the Serenity Prayer: 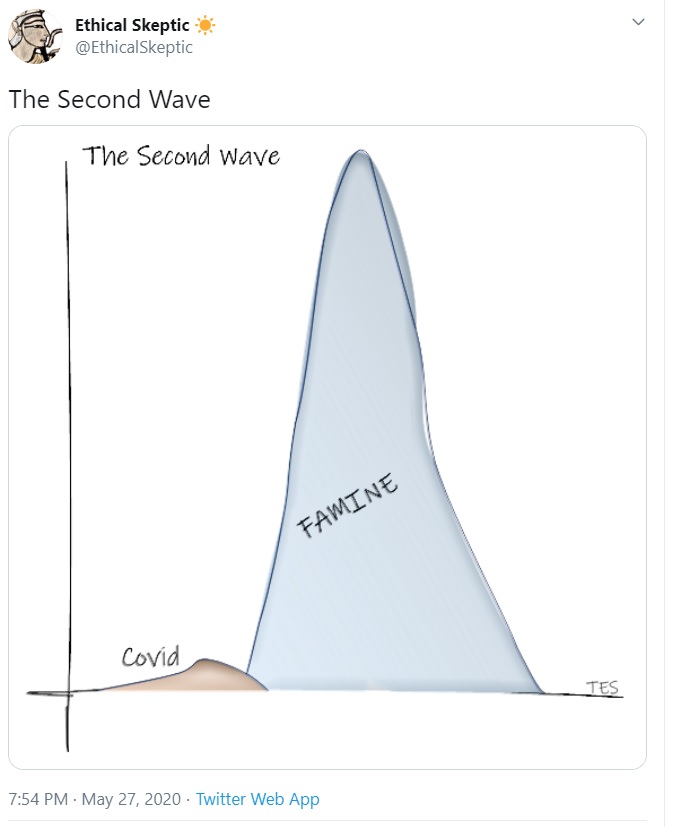 There is not a political party you can vote for that doesn’t want endless wars and has a credible plan for paying down the national debt.  Build a well thought out investment strategy that is diversified and consider allocating a small portion to gold as insurance.  Gold can be really fun to own like it was in the 2000s, but it can also break your heart as it did when it dropped from $1,900/oz to $1,045 and then went sideways for years while U.S. stocks soared.  If you are going to own it, think of it as insurance.  You pay the insurance company a premium in case you wreck your car or your house burns down.  This is the same thing.  It could be a drag on your portfolio, but may pay off all at once if the West turns into Argentina.  If you are considering adding gold to your portfolio, reach out to me and we can come up with a plan.

Stocks and real estate often appreciate along with inflation.  Don’t forget you own shares in companies that own tangible assets and valuable IP.  Good companies and properties can raise their prices to keep up with depreciating currencies.  Bonds and cash often don’t keep up with high inflation economies.  I continue to own bonds and you should too.  Nobody knows what is going to happen and when.  Who could have predicted the long bull market we just had way back in 2008?  I get the impression that many investors are baffled that stocks have had an explosive two month rally in the midst of absolutely rotten news.

It has been some time since I wrote about gold, but I still stand by every word I wrote in The Case for the Gold Standard and How to go Back to the Gold Standard.  I also am still Fed Up with our central banks.  Consider reading these articles if you would like to learn more about monetary history and economics. 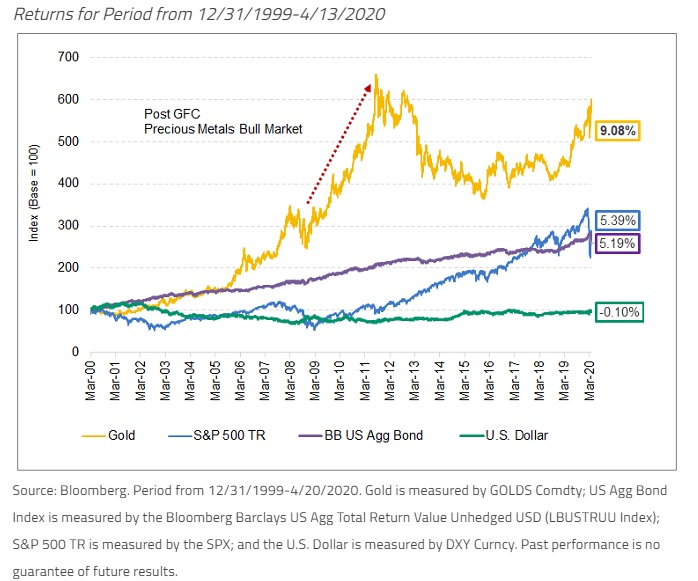 After you have a well thought out investment plan that you are comfortable with, consider taxes.  It seems to me that the awesome TCJA tax cuts may not live to see 2025.  I certainly can’t imagine the cuts getting extended.  Pull up the 2017 brackets and compare them to 2019.  Many people are paying significantly lower rates today, especially if you get the 199a deduction as a business owner.  I don’t see how taxes don’t go up to pay for the Covid response.  In light of that, call me and we can see if a Roth Conversion makes sense at the low TCJA rates.  It could also make sense for some people to lower how much they are contributing to retirement accounts on a pre-tax basis and instead build liquidity outside of their 401ks for awhile.  The lockdowns and job annihilation we just witnessed is a good reminder of the importance of the need for having money outside of a retirement plan and a solid cash reserve.

I doubt the U.S. ever defaults on its debt.  It is far more likely they continue to devalue the paper and pay your Social Security in worth-LESS currency.  Eventually the debt will matter.  The low interest rates are going to make it very difficult for insurance companies, endowments, and pensions to meet their obligations.  Cities and states will have to raise taxes and/or cut services to fund their pensions.  Other pensions, like the Dallas Fire Fund, will simply not be able to pay what was promised.  It is now estimated that they can only pay current benefits for 7.3 years!  Expect much fighting between government employees and taxpayers in the coming years.

For a further discussion on the unpayable debt and Modern Monetary Theory, watch Jeff Gundloch’s interview below.  This is from lat 2019, but even more relevant now.  Domestique Capital invests in Doubleline Mutual Funds.  Reach out to us if we can help you with anything and I sincerely hope you enjoy your Summer.