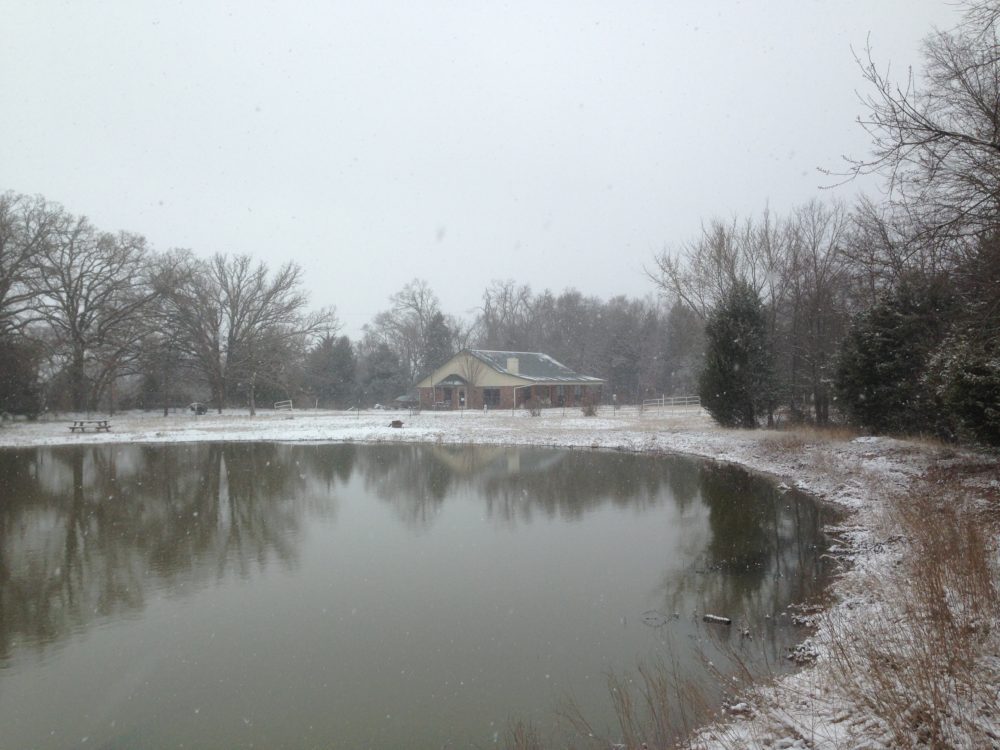 I am a fifth generation Texan and it has long been ingrained in me that real Texans have ranches and clear brush and shoot targets on the weekends.  I grew up in a nice area of West Houston where it felt like all of my friends’ families owned a ranch, lake house, or beach house in Galveston.  On any given Monday you could overhear someone talking about what they did on their four wheeler or how many catfish were on their trot line when they woke up on Sunday morning.

Memories of visiting my friends’ properties, movies, and biographies of great Texans influenced Kim and I  to buy a 10 acre property in East Texas in late 2009.  We found a wonderful house that was fully furnished.  The property had a stocked pond and was very close to some great outdoor activities.  Our plan was to go out there two to three times per month and get away from city life and relax with no television.  We also envisioned a family gathering place where our families would celebrate holidays and life events.

The first few years were terrific.  We went out there about twice a month.  I learned how to shoot guns and fish on the pond and a nearby river.  We will always cherish the great times we had out there with friends and family.  It was nice to burn brush, repair barbed wire fences, and live closer to how my ancestors did (even if only on weekends).

In the last two years, Kim and I have felt busier and busier.  We would often have plans to leave for the country house for the weekend and end up not going because a friend or family member would tell us at the last minute they were going to be in Dallas.  Our twice a month visits occasionally turned into once every two month visits due to obligations and planned vacations.  What was once so fun started to feel like an obligation.

When you don’t visit as much, the chores start to back up and we found that we were spending 1/4 of our time cutting cords of wood, mowing, and cleaning the inside of the house. This led me to put pencil to paper and calculate the cost per night for our paid-for vacation home.  With taxes, insurance, gas to get there, and utilities we were spending about $500 per month for a property that we owned outright.  I then figured that we were spending an average of only four nights per month there in the later years.  $500 divided by four is a whopping $125 per night–not even counting maintenance on the property.

Kim and I both have good jobs and don’t have children. We could easily afford spending $6,000 per year for the property, but we started engaging in a conversation about the pros and cons of owning a second home.

Advantages of Owning a Second Home

Owning a second home has the following advantages:

You know exactly what to expect on your own property and can leave your stuff there for the next time.  It is nice to show up to a place and have all your gear ready to go without having to pack.

Because you already sunk a bunch of money into it, you are more likely to go on weekend trips to it than if you didn’t own a place and had to pay per visit.

It could appreciate in value and diversify your assets.

We found that for us the disadvantages started to outweigh the advantages.  I am at a place in my life where I feel like less is more.  Over the last year I have sold my second car and my motorcycle with no regrets.  Those are two more things I don’t have to worry about maintaining, paying taxes on, and getting inspected each year.  I haven’t once regretted the decision.

I have also come around to admire the shared or on-demand economy.  Uber and Airbnb are now valued around $50 billion and $25 billion respectively and haven’t even been in business for ten years.  Uber is more valuable than General Motors and Airbnb has a higher valuation than Marriott!  I have heard the average car sits for 23 hours per day.

If you want to buy a car for $30,000, you might have to earn $40,000 before taxes just to pay for the car.  You also have to pay for gas, maintenance, taxes, and insurance.  Not many people have considered how many actual hours they work per week just to pay for the convenience of owning a vehicle.

While I am not quite ready to go carless, I do acknowledge that the system we have in the United States is an enormous waste of resources.  Imagine how much money would be freed up in an economy where very few people owned cars and driverless vehicles would quickly pick you up and safely take you anywhere you needed to go for a small fee.  There would be less cars clogging the roadways and vehicles would become productive assets instead of depreciating away in garages and lots.

I also like the concept of Airbnb.  There are far too many underutilized properties out there.  Too many vacation properties are depreciating away under hot sunshine, torrential rains, and ice storms  and it just seems wasteful that they aren’t getting much use and enjoyment.  I like how Airbnb and VRBO.com are freeing up a vast inventory of rooms for the enjoyment of guests.  Our East Texas Getaway was sitting empty for over 300 days a year!

We found that friends and family didn’t come out as much as we hoped. Here is an article that shares others peoples’ struggles getting visitors to come out.

The biggest hassle for us was maintaining a second home.  I have thought that hotels were overpriced my entire life.  Too me they are just a place to sleep and even at $60 per night I have not been thrilled to shell out the cash to pay for them.  After owning a second home, I feel a lot better about paying for a hotel or rental home.  There is value in having maid service and not having to maintain your own property.

The other big problem with owning a second home is that it is in the same place.  It may take years but after awhile, I always get bored with going to the same place over and over.  Eventually you have done all the different weekend excursions that you can think of and eaten at every good restaurant multiple times.  I have something in my nature that wants to explore and try different experiences and Kim and I began to realize that spending the $6,000 per year from our second home towards vacations and different experiences would be a better use of the funds.

The last reason why I would not recommend owning a second home is freedom.  The more stuff you own, the more things you have to worry about.  It is mentally freeing to not have to worry about that house anymore and to not feel like we are wasting money by not getting enough use from it.  I like having the extra dollars to now rent a room in a location that I haven’t been before.

Was it a Good Investment?

We paid $135,000 for the fully furnished property about six years ago and just sold it for $200,000.  At first blush you might think we made a great investment.  It really wasn’t when you consider all of the costs.  In six years we paid about $25,000 in property taxes and insurance alone.  Additionally we need to add in:

-The cost of a new roof covered by a hail claim.

-Utilities (pro tip- many rural utility companies charge a minimum amount per month just for access to the service.  For instance, our water bill was $20 per month plus a charge for actual usage.)

-Interest paid on the loan while we had the loan

-Transaction costs of buying and selling the property.

All in all, I estimate that we came very close to breaking even on the property.  You also need to factor in the opportunity costs of having that money tied up in a non-income producing property versus a productive portfolio of stocks and bonds.

The last benefit of not owning the property is that we will likely reach financial independence much quicker.  There are two piece to this equation: 1. We can save more each year which will build our next egg faster and 2. We don’t need as big of a nest egg because our new retirement goal is $500 less per month than our old goal.  Many financial planners follow what has become known as the 4% rule.  It is a quick way to estimate how much you need to retire.  You take your annual spending needs and divide that number by 4%.

I hope my experience can help you make a better decision as to whether a second property is right for you.  Two months after the close, Kim and I have zero regrets.  After my experience, I would not recommend buying a second home.  I think most people are better off spending the same discretionary dollars on vacation rentals across the world.  If you have friends with vacation properties, accept their offers to visit because chances are they are like us and bought it to make memories and not to have it sit vacant so often.