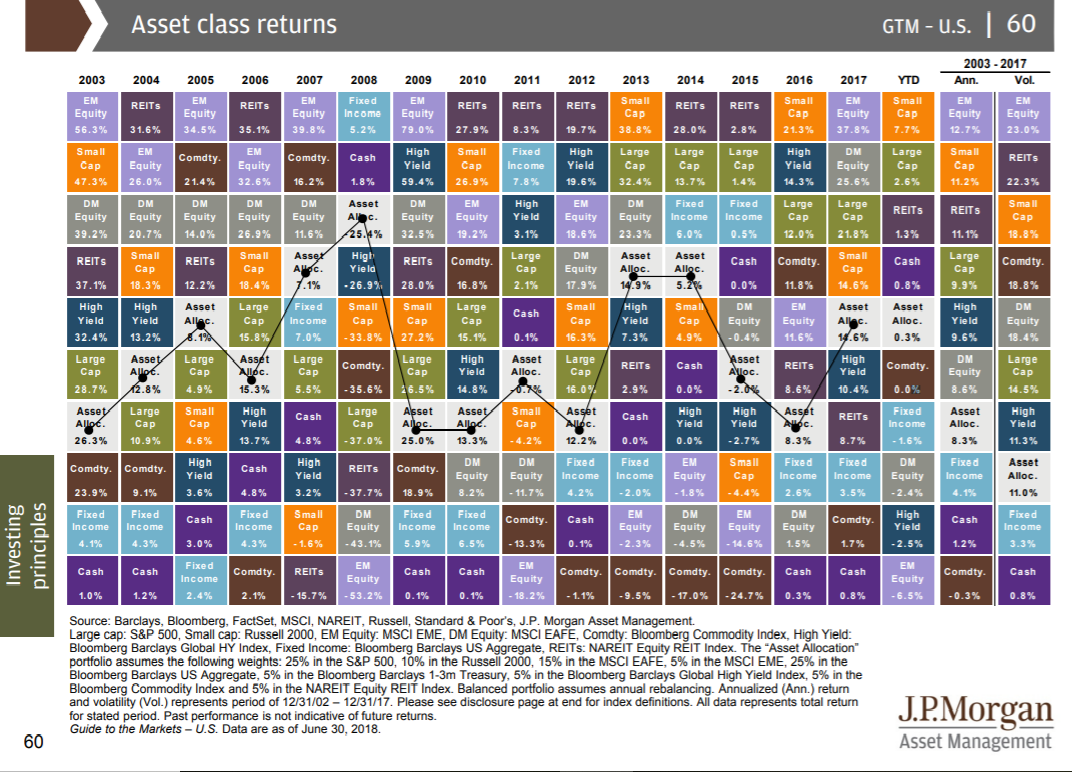 2017 was an investor’s dream.  It was one of the least volatile years in stock market history and every asset class that I can think of went up.  Unless an investor was using Bitcoin’s 1,318% return as their benchmark, most investors were happy.

2018 has been a more normal year with increased volatility and wider variations in returns among different asset classes.  As I write, at the end of August, many people don’t remember that the S&P 500 went up 7.5% by January 25th of this year.  After the extreme melt-up we saw over a 13% crash in only 10 days.

Since then there have been an endless stream of news stories about how bad the trade wars will become, political scandals, and warnings about how the US is in its second longest expansion in history.

I have had a couple of clients ask if we should now try to time the market since expansions can’t go on forever and why returns in 2018 aren’t as rosy as they were in 2017.  Let me start with the later question.

Below is a chart of year to date returns of six State Street ETFs representing different asset classes.  The chart only tracks price and does not count dividends.  Domestique Capital LLC uses State Steet ETFs in portfolios.  The orange and the pink lines are US large and small companies, which are having a good year.  The purple (bonds), light blue (foreign stocks), dark blue (Emerging Markets), and yellow lines (gold) are all negative year to date.  As someone once said, diversification means always having to say you are sorry.

As you can see in the chart above, it is impossible to determine in advance how each asset class will rank each year beforehand.  Predicting how millions of market participants will behave is a fool’s errand.  If you diversify and invest in an Asset Allocation like the gray box above, you will wind up somewhere in the middle each year.  Never the best, but also never the worst.

Avoiding bonds because stocks have been going up would put most investors over their skis in a portfolio that would be far too volatile to sleep with during the next recession.  Likewise, avoiding foreign stocks this year since they are down makes as much sense as only investing in stocks that start with letters in the first half of the alphabet.

About one half of the world’s market capitalization of stocks is in companies located outside the United States.  The US out-performance is a recent thing.  From 2003-2007, I was battling clients that wanted to over-allocate to foreign stocks, especially Chinese Stocks.  Foreign stocks also did substantially better than US stocks during the decades of the 70s and 80s.  From 1998 to 2017 The US stock market was the eighth best performing stock market; under-performing Denmark, Hong Kong, Canada, and others.  Should we all only own Danish stocks?

It is hard to ignore the news, home country bias, and recent trends.  Foreign stocks tend to go through long periods of out and under-performance against US stocks.  Nobody knows when the trend will reverse, but it is worth noting how poorly Foreign stocks have performed against US stocks for the last five years.  It is also worth noting that many people are worried about when the US stock market will have its next bear market.  Emerging Markets have already experienced a bear market from their January 26th highs.  Maybe they go lower from here, but aren’t you supposed to buy investments that are low?

How Much Longer can Markets Rise?

The short answer is nobody knows.  I think it is wise to look at economic history and realize that we are currently in thin air.  At the same time, just because the boom of the 1990s was the best expansion ever recorded, that doesn’t mean that we don’t break that record here.  Anything is possible when it comes to  markets.  There have been dozens of reasons to not stay in US stocks since the 2009 lows.  Back then, could you have imagined we would be where we are today over nine years later?

Stock markets tend to peak when things are rosy and the US economy is currently booming.  Economists pay attention the Federal Funds Rate to try and determine if our Central Bank is being too tight or too loose.  The Fed Reserve usually drops interest rates during a panic and as the economy recovers they raise rates to try and keep inflation under control.

You can see that from the end of 2008 until October of 2014, the Fed kept interest rates close to zero.  Since then they have been ratcheting higher.  As they raise rates, many consumer and business loans become more costly and eventually we hit a tipping point where enough loan obligations cannot be met and we go into a recession where the Federal Reserve starts to lower rates again.

When will the next recession be and how much the stock market will drop is anyone’s guess.  Let’s face it, the future is always uncertain.  We didn’t know US stocks were going to go bananas in 2012-2013 when stocks were crashing in the Fall of 2011 during the European Debt Crisis.

Even though I am concerned about how long the expansion has run and I too read about how smart billionaires are getting out of the stock market, I know that nobody is smart enough to time when to get out and when to get back into markets during every single recession.

The S&P 500 lost about 45% during the Tech Wreck and about 57% during the Great Financial Crisis.  Perhaps the next recession only sees a 25% drop, or 29%, or 31.4971% drop.  Since we can’t know, my best advice is to run your investments through a software simulation to get a better understanding of how much risk you are taking and make any adjustments you think are needed while the economy is rosy.  We also all have to be mentally prepared that ‘Trees don’t grow to the sky.”  Economies are cyclical and there will be several more recessions in most people’s lifetime.

Instead of thinking you can time the market, it is best to build a diversified portfolio that includes some boring bonds that will reduce your overall losses during the next bear market.  If you would like to complementary portfolio review, please reach out to us.