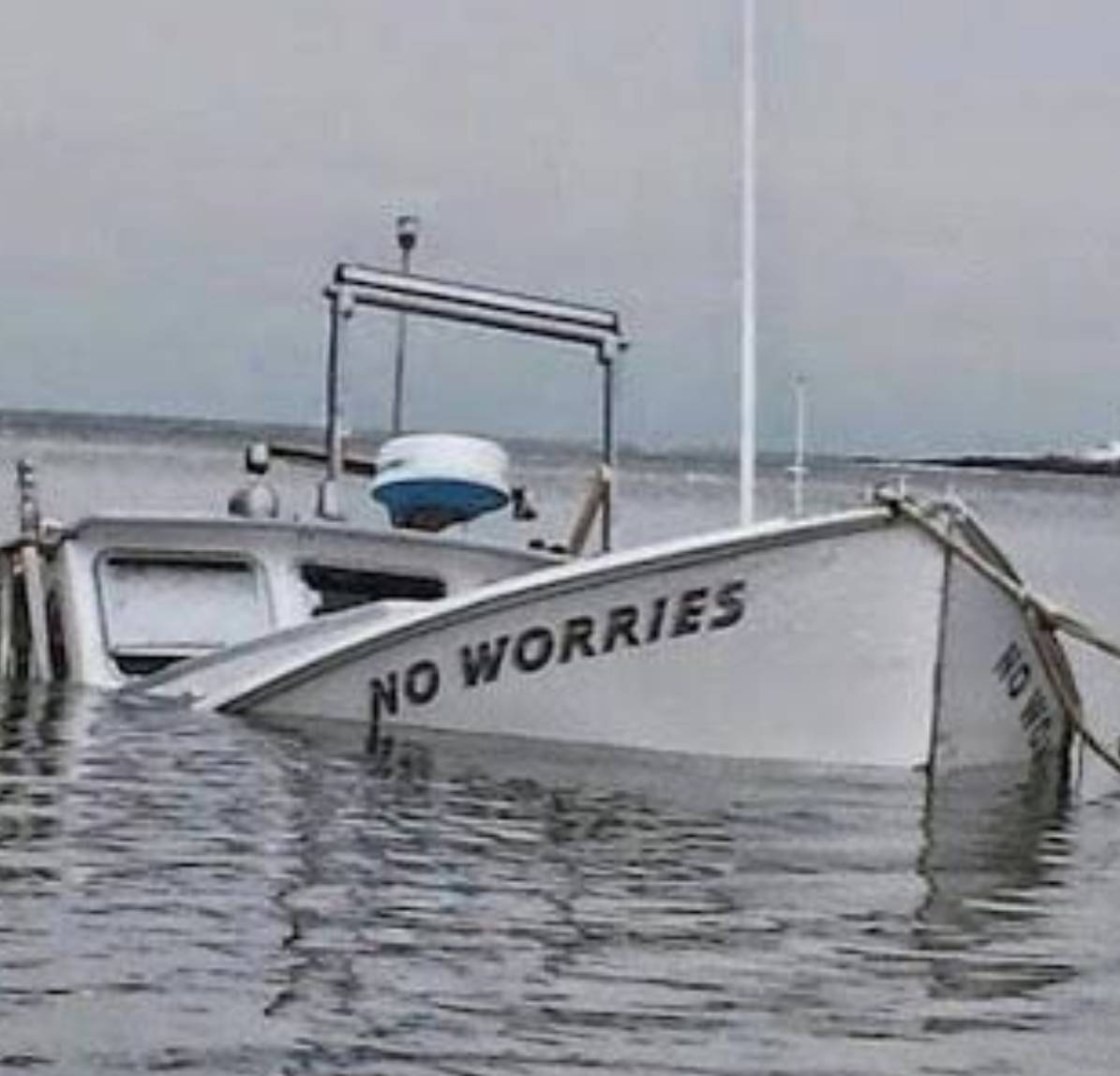 I had a lot of clients wanting to talk about markets and their investments in the last half of June.  We had officially reached a bear market and stocks, bonds, and crypto were getting smoked.  Here is a how the typical conversation went:

Client: I just looked up our accounts and we have lost a lot of money.  With all the uncertainty shouldn’t we sell everything and go to cash?

Me: This has been a really difficult six month period.  Stocks are down about 25% and for the first time in my life, not career, bonds are down big and not helping.  I am certainly frustrated, too.  It is hard to see your hard-earned money go down week after week.  It is easy to extrapolate the downtrend and feel like your retirement is going to keep dropping forever.  The Federal Reserve and other Central Banks really screwed up.  They shouldn’t have left rates at zero for all of 2021 and kept printing so much money.  The stock market gave us 3 years of return all in 2021 as the Fed inflated more bubbles.

Client: Yeah, I can’t believe all these kids are spending millions on digital pictures of monkeys and real estate in the Metaverse.  My house is up 20% in a year and I can’t imagine paying what it is supposedly worth.

Me: I really wish I could time the market.  I have paid for many timing services, followed all the Gurus, and spent dozens of hours on technical analysis and charting.  My conclusion is that it is just too hard to do it successfully over the rest of your life.  Every 5% correction starts off just like every 30% correction and it is too difficult to tell catch the highs and lows.  I just read a study that says the average bear market bottoms at 32%.  I think it is far too dangerous to lock in losses of around 25% in stocks to possibly save a 7ish percent further drop.  Of course we could be in a major bear market that sees stocks drop 40-50% before it is over.  Nobody knows.  What I do know is that 90+% of people don’t do well with timing markets.  We just aren’t psychologically geared for it.  Unless you see Paul Tudor Jones, George Soros, or Steve Cohen looking back at you when you look in the mirror, don’t attempt it.

Client: But don’t you watch the news.  Nothing looks good.  Inflation is out of control, Russia is going to occupy Europe, and I think China is about to invade Taiwan.

Me:  I hear you.  I believe we are already in a recession and it would not be a surprise if markets found their ultimate low in the Fall or even Spring of next year.  The earnings announcements from Walmart, Target and Ross Dress For Less in Mid May were terrible.  The poor have to shop there and the bottom 20% are in real trouble.  My best guess is that we aren’t through this and the Fed is now raising rates in the middle of a recession.  Even though I think we see new lows this Fall, I recommend you stick with our well thought out, diversified portfolio for two reasons.  Reason one: nobody has a crystal ball and even though I think stocks still find a lower low, I could be dead wrong.  Almost all of the smart people I follow think things are going to get worse.  When has it been so easy to call a bear market/recession?  Reason two: In my over twenty years of being a personal financial advisor, I have seen just how hard it is to manage our emotions.  Fear and Greed are very powerful feelings.  There are a lot of people that sold in late 2008 at higher levels than the ultimate bottom, that didn’t have the guts to buy back in for years after the lows.  You have to be right on selling and on buying back in.  You may get one bear market right, but if you are lucky, you will live through 5 more bear markets and the odds of successfully timing all of them are extremely low.  If you absolutely can’t take the stress anymore, sin a little and sell only 5-10% of your stocks.  Going 100% to cash wreaks havoc on your emotions and is a recipe for disaster for most people most of the time.

Client: Thanks I feel a little better and that makes sense.

Me: Draw-downs are tough.  I am here for you anytime you need to talk.  There is one last thing that might help you.  Stocks are down about 25% from their all-time highs.  I have already said that my best Guess is we go even lower.  Eventually we will get back to the highs.  Even if we go lower; how long do you think it will take to get back to where we were in January?

Me:  Well if we take the high on the S&P 500 of 4,808 and divide it by the June 16th low of 3,639, we know we need to gain 32% from the lows to make up for the 25% loss in stocks.  If it takes three years to get back there, that is a bit over 10% per year in return from the lows.  If it takes four years, that is about an 8% per year return.  I wouldn’t be unhappy with those returns and maybe you can increase your monthly savings a bit to take advantage of the lower prices.

Since the June 16th lows, the economic news continues to be very poor.  The last jobs report was great, but don’t forget jobs are a lagging indicator.  I was surprise to hear AT&T’s CEO state on July, 21 “We have customers that are stretching out their payments a little bit…We expect that they’re going to continue to pay their bills, but they’re taking longer to do it. That’s not atypical in an economic cycle.” Things are so tight for the bottom 20%, they can’t afford to pay their cell phone bills on time?  How are they going to make rent and fill up their tanks?  What is going to happen when the inevitable emergency comes?

On July 26th, McDonald’s reported that sales at restaurants open for 13 months or more were up 3.7% over last year for the quarter.  If inflation was at least 9%, their real sales are down in real terms.  Their CFO, Kevin Ozan, noted that some McDonald’s customers, particularly those with lower incomes, are avoiding combo meals and opting for value items instead.  This does not sound like a strong economy.

On July 27th, the Federal Reserve raised the Federal funds rate by .75% to 2.5% as expected.  Rising rates mean companies and people pay more in interest costs.  Eventually the central bank raises rates too high and it brings on recession.  This isn’t great news and it has already caused stocks to sell off this year.  On top of raising interest rates, the Federal Reserve is also supposed to be selling some of their bonds.

On July 28th, it was reported that second quarter GDP contracted by .9% and that was the second quarter of contraction in a row.  The recession is secure and the only question now is how deep it goes.

On top of all of that bad news, the yield curve continues to be inverted.  A popular indicator for investors trying to predict recessions is to watch for when two year treasuries pay a higher yield than 10 year treasuries.  That is not typical because there is more risk in lending money over a longer time than over a shorter period.  As you can see in the chart below, this indicator worked really well to call the 01-02 recession and the 08-09 recession. 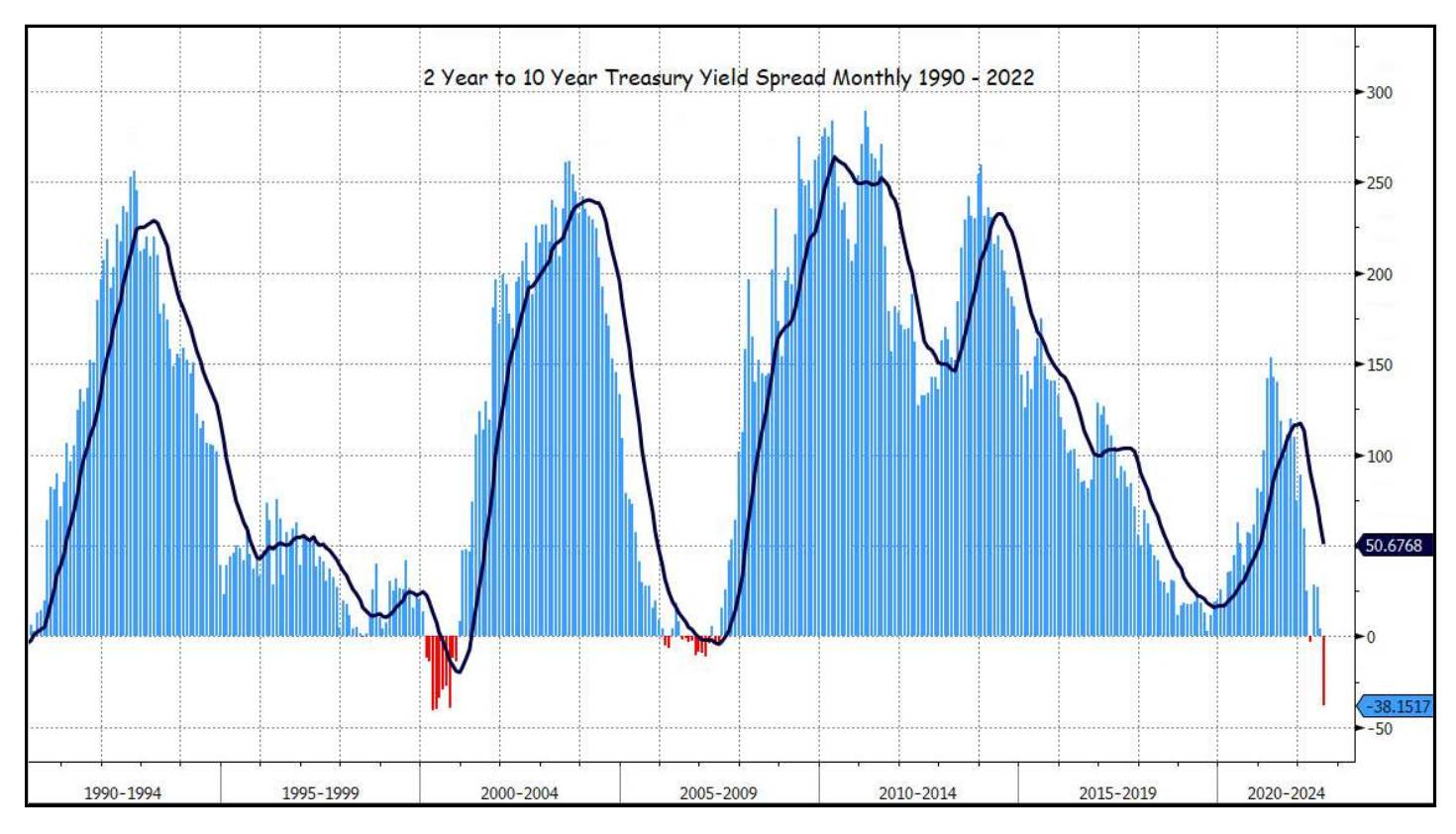 In addition to all the bad news in the U.S., Nancy Pelosi almost started WW3, nothing is better in Ukraine, and Europe’s power prices are out of control and their drought is starting to affect shipping on the Rhine.

Despite mostly awful news, the S&P 500 is up 15.7% since its June 21st intraday low and is only down about 12% from its all time high.  Imagine having sold $1 million of stock at the lows and watching all these bad data points for a month and a half and sitting in cash today knowing that your decision has so far cost you over $150,000.  How painful has this rally been to your psyche?  It may not make sense, but markets can do anything.  How do you know to buy back into this screaming rally?  If you are still bearish, what kind of conviction would it take to stay in cash while the rally leaves you behind?  Creating a sound investment strategy to help you achieve your financial goals is easy.  Thinking long-term, not doing anything stupid, and managing your emotions is what is hard.

It’s really cute seeing Bears at the lows transitioning into Bulls at the top.

This is what Bear Markets are supposed to do ☺️

So is the bottom in?  It could be, nobody knows.  My best GUESS is that we have new lows to make.  You can see in the figure below that the S&P 500 is tracking closely to the last time we had a major inflationary recession.  It is easy to draw comparisons like this, but they often fail.  IF this is good comparison, we could have another year before the final low is in place.  The silver lining is that you can see how quickly losses were made up in the nine months (blue line) after the October, 1974 low. 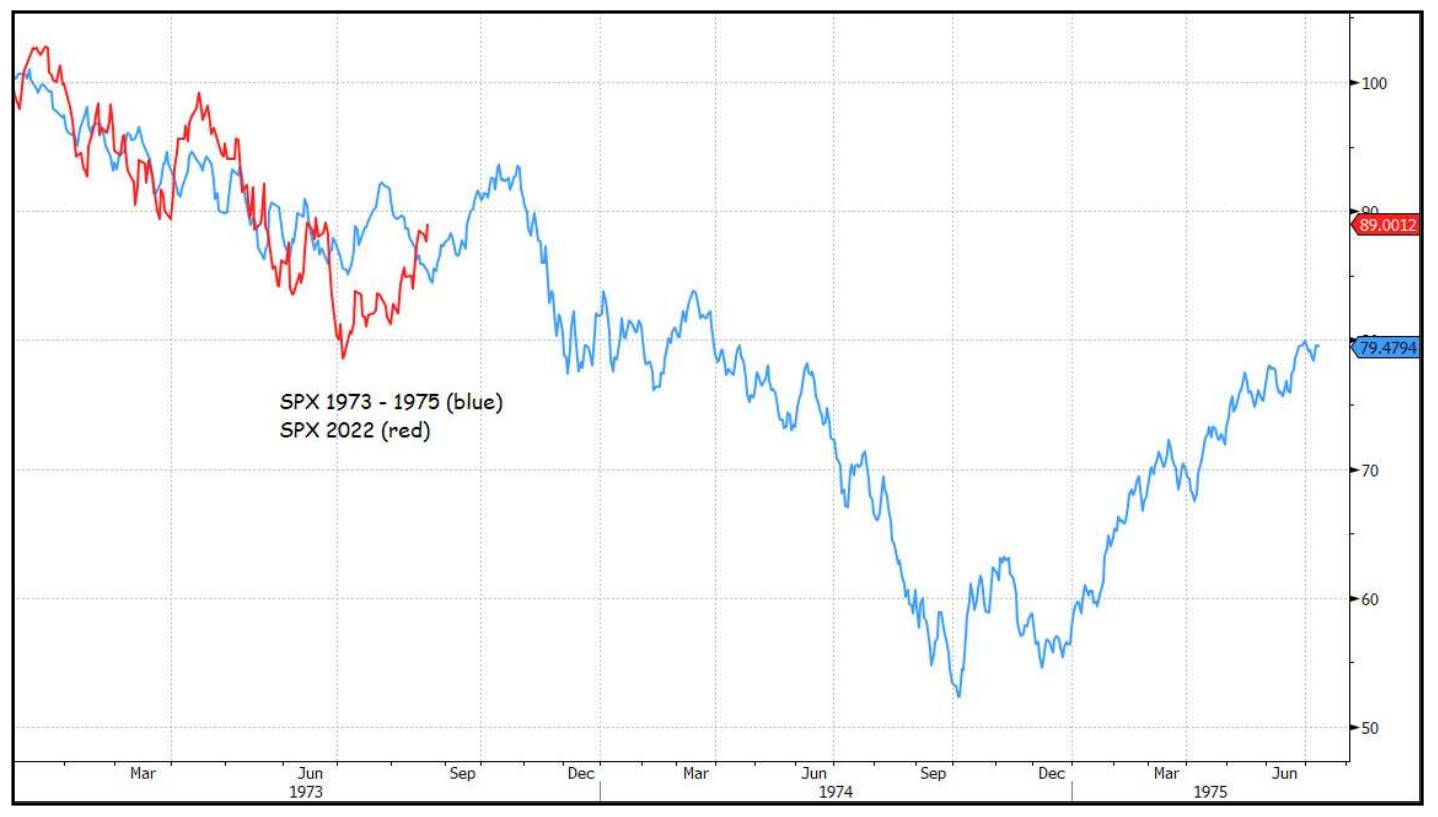 If I can be of assistance, please reach out.